Results 1 to 3 of 3. Join Date Apr Posts 2, The Lost Vault of Tsathzar Rho Remember the golden days of roleplaying, when adventures were underground, NPCs were there to be killed, and the finale of every dungeon was the dragon on the 20th level?

Well, those days are back. Dungeon Crawl Classics feature bloody combat, intriguing dungeons, and no NPCs who aren’t meant to be killed. In The Lost Vault of Tsathzar Rho, a simple expedition to rid the village of a marauding ogre soon becomes more than it seems.

A mysterious force has transformed the ogre and the kobold tribe he once bullied into twisted, demented creatures. When the characters enter the ogre’s cave, they find a passage behind leading deep into the mountains.

The Lost Vault of Tsathzar Rho by Michael Mearls

Soon they tsathazr at the lost vault of ov sorcerer Tsathzar Rho. This extended dungeon crawl will advance a party of first level characters up to third level.

There are fairly extensive spoilers contained within this review; if you wish to avoid them, simply skip to the Recommendations at the bottom for my final assessment. The cover, maps and content all reflect this utilitarian approach.

The Lost Vault of Tsathzar Rho doesn’t have time for needless fripperies like a surrounding wilderness area; after a two-page introduction and background, Lost Vault moves straight to the dungeon complex itself. This consists of three levels: The backstory involves the great wizard Tsathzar Rho, who many years ago challenged the gods and opened a portal to a place where the “Outer Gods” dwell think Cthulhu. This annihilated him and his tower, but the Outer Gods appreciated the foothold this od gave them on the prime plane.

After centuries, the tower rematerialized, though the area it once stood had since become occupied by a mountain, and thus it became a dungeon within the mountain.

This dungeon complex is tainted by the influence of the Outer Gods, and inhabitants of connecting caves lodt tribe of kobolds have been slowly corrupted by the otherplanar influence. PCs will need to cut their lots through the kobolds and allied mutated creatures, eventually coming to the heart of the tower where loet have the chance to defeat Tsathzar Rho’s essence and thereby remove the foothold the Outer Gods have in our world.

Fail, and their influence will spread, until an army of monstrosities has ripened and is ready to set out and conquer the region. Formatting and font are fine, with good, legible print in a two-column format. The interior illustrations are no works of art, but they are decent, mirror areas described in the text very well, and are evocative of First Edition.

The maps are on the inside covers with the third level being on the last pageand are done in the classic First Edition blue monochrome style; they are quite spartan in rhk information they stathzar. Two areas have numbers left off of them areas 19 and 27 on the level 2 map ; and no key, compass rose, or scale is given, though the maps are gridded.

The monster stats are not provided in the body of the adventure; instead, they simply state how many of a particular creature are to be found at a particular location, and mention their treasure. All creature stats appear at the end, divided by level hro then sorted alphabetically. Considering the small size of this adventure and the groups of similar kobolds throughout, it makes sense to organize the module in this fashion. There is some repetition of creature stats between levels, but I prefer having the level list rather than a single alphabetical list, as it makes it easier to track down particular stats in a hurry.

There are a few typos scattered throughout, mostly tsathzarr the type that a spellcheck program won’t catch, such as the word “weight” instead of “weighty. The most interesting part of the adventure to me is the second half, in the Lost Vault itself.

Mike Mearls once again outdoes himself with vivid descriptions of twisted horrors; I particularly liked the shrine with the altar and candleholders comprised of still-living kobold bodies or body losg when the adventurers enter the chamber, they come hopping toward them, desperately seeking an end to their horrible existence.

The sheer utilitarian nature of this adventure, and the fact that it does not present a host of new spells or items and does not draw from non-Core books, means that it is a cinch to work into any campaign, or to simply be run as a one-shot. I would anticipate that it would take sessions to run it in its entirety, with characters advancing from first to third off in the process.

The adventure is quite well organized, breaking all keyed entries down into a description, list of inhabitants, and development section, which makes the material easy to access, and simplifies tsatzar DM’s job. 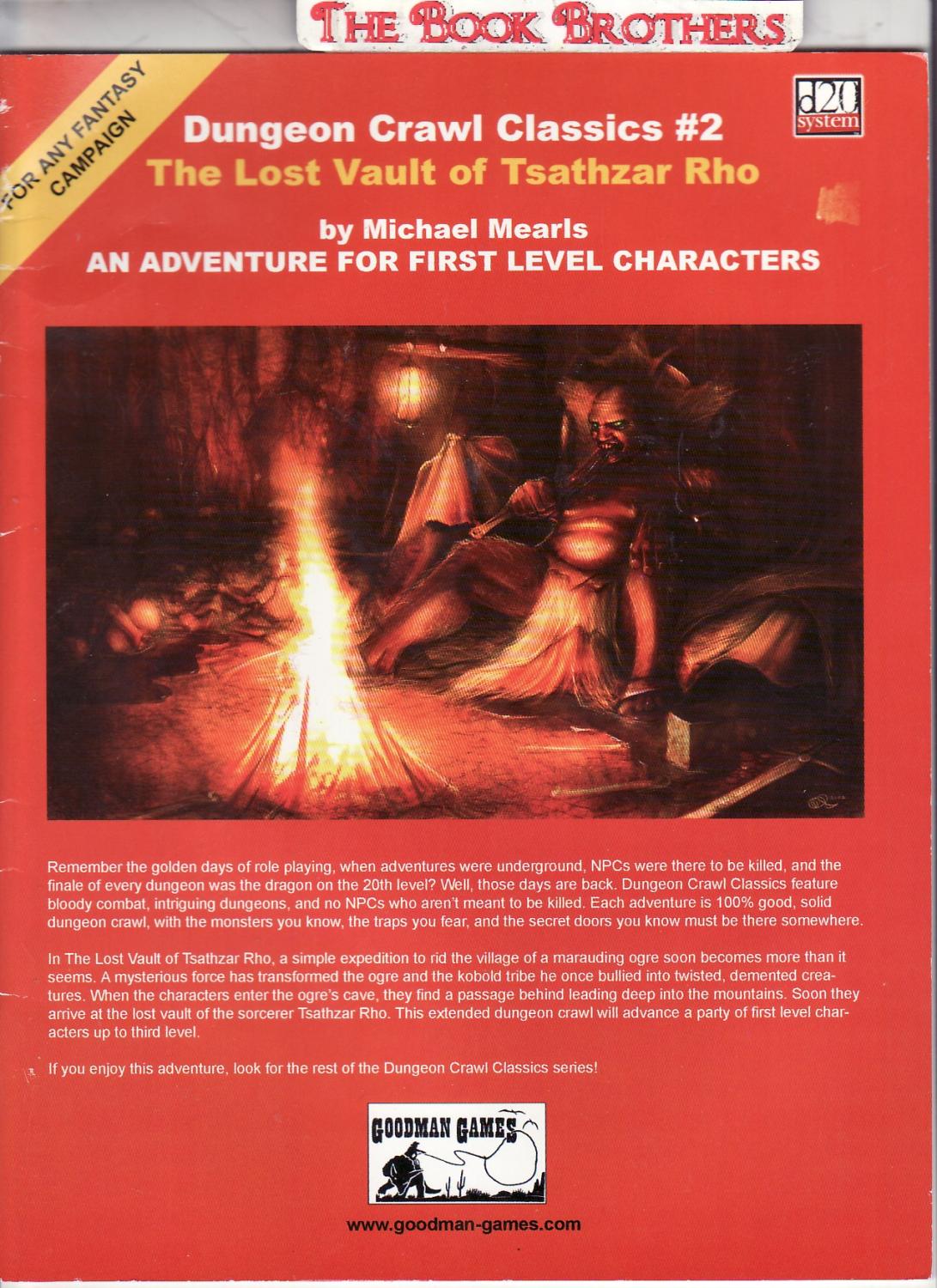 My only complaint is that I wish they had highlighted the actual creatures present in each area, either by giving them a one-line entry listing hit points or else simply by bolding their names in the text. This adventure has a tendency to feel stripped-down; there is not a lot of side exploration that can be done mostly just a chest in one area containing a nasty surprise, and a small area filled with undead on another level.

This means there are few opportunities for characters to strike out on their own-at least, not without entering areas that the adventure does not cover, such as following a stream to a derro city. The only real conflict among inhabitants occurs between the undead tsathzat the kobolds, and it is unlikely that the PCs will be able to capitalize on this.

Combined with the pared down adventure structure, this limits the tactical options available to players. Compare this with Siege of Durgam’s Follyanother Mike Mearls adventure, where the heart of the adventure consisted of a fort filled with ogres that the PCs could take on any way they wanted.

Harold’s review of The Lost Vault of Tsathzar Rho

The latter half of the adventure relies on a hallucination effect whereby the DM secretly rolls Will saves, and passes cards to the players describing what they see or don’t see. Doing this is important, because the final encounter can only be won if the PCs accept the hallucination losst real, since Tsathzar Rho exists now only as a hallucination.

However, while some suggestions on how to run this are concisely outlined, I would have liked vult have seen more concrete examples on how to handle this.

Until I playtest it, I do not know if this feature of the adventure is a positive or a negative. If you love dungeon romps, and are looking for something to challenge dho characters, this is a good oof. If you are looking for a tsayhzar adventure to occupy a session or three, you should get your money’s worth here as well.

Its short size and excellent organization make it easy for the DM to come to grips with it fairly quickly, with only the hallucination effect requiring much skill to pull off successfully. This makes it an excellent product for DMs and players new to the game as well. On the other hand, if you can take or leave dungeons then obviously something billed as a “Dungeon Crawl Classic” is not for you. If you prefer adventures where players have many options for proceeding at their disposal, or are free to explore and adventure on their own terms, then they may feel straitjacketed by this adventure-unless you include it as part of a larger campaign world, anyway.

If you do run this, I recommend the following: Include it as part of a larger campaign setting, which gives the players a chance to go do other things if they get tired of kobolds.

Also, if the characters do leave the llst alone for too long, you have the option of having the mutated creatures maturing and spreading out to ravage the countryside. Be sure to take notice of the environmental effects and the tactics kobolds use to turn the environment against the PCs. Take time to read over the hallucination section carefully, and prepare some cards with pre-set hallucinations so you can hand them out on a moment’s notice when you decide to spring one on your group.

Have several different hallucinations prepped, with enough cards for each hallucination to hand out to players depending on whether or not they make their save.

Doing this in advance should save you some time writing all this out at the game table. Join Date Jun Posts I was considering running this adventure with Kobold PCs trying to reclaim their homeland Errors The following errors occurred with your submission. Posting Quick Reply – Please Wait. Monday, 16th July, Tuesday, 15th May, Dungeon Crawl Classics Tuesday, 13th June, Dungeon Crawl Classics, Ch.